Yes, you DO have the imagination to tell stories!

Think you don’t have the imagination to tell stories? Yes, you DO!

First of all, let’s clarify what we mean when we talk about that phenomenon called ‘imagination’.

Imagination is the ability we humans have to conjure up pictures, sounds, smells, textures and tastes which are not actually there in front of us. That’s it.

It is a great mystery of life that our brains are biologically able to do this. When you think about it, it is pretty incredible that we can ‘see’ a familiar face without that person being in the room. It is amazing that we can ‘hear’ a song in our heads without it actually playing anywhere. But we ARE able to do it. When you do this, you are using your imagination. 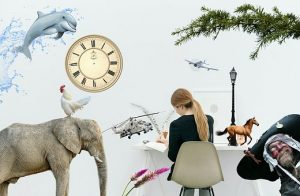 Therefore, you definitely DO have the imagination to tell stories. Please… banish forever that false belief that some people have imagination and others are born without it. That is total codswallop.

I can’t make things up, though…

One of the most common pieces of advice to new writers is ‘Write what you know’. A great many of the stories out there are based on real events. Some of those stories’ writers move away from the gospel truth of what happened, while others stick firmly to the straight path of how events unfolded. Either approach is fine. The point is that you are telling a story.

Secondly… it’s not even true that you can’t make things up.

Just like any other part of your body, the parts of your brain which control your imagination can be trained. You can start with imagining people and things you know well. Focus on recreating in your mind’s eye the colours, shapes and textures. Stretch and squash the shapes until you have them right. Imagine dripping drops of ink onto the picture until you have the right shade. Do the same with the sounds, altering them with a make-believe dial or buttons until the pitch, rhythm and quality is right.

When that becomes easier, move on to conjuring up things you’re less familiar with. This could be the time to add in other sensory details such as smells.

Once you’ve developed your skills in this way, you can turn your mind to creating a mental film of a city you’ve never been to in real life. You can even start creating images of things that don’t exist at all – the elements that make up the alien world in a science fiction story, let’s say.

The kind of stories you tell are entirely up to you. You might recreate a world that’s very familiar to you, or you might set it on Mars. Whatever stories you tell, though, you ARE using your imagination, because you are presenting a world and characters which aren’t really there doing those things at that moment.

Want to learn how to transform the impact you have with your stories? Join The Storytellers’ Academy
Found this article useful? Join the free Facebook group ‘I’ve Got a Story to Tell’